Agate is the name given to a family of chemically related stones. There are over thirty distinct varieties of agate making it one of the largest families of stones. All agates are composed of SiO2 They form according to a trigonal crystal structure, and have a hardness of 7 on the Mohs scale. *Please see other gem varieties of Agate such as Carnelian and Bloodstone in their own listing. Turritella Agate was formed due to sedimentary rock formation as part of the sea floor became so compressed it turned to stone. It contains fossilised sea shells and tiny sea creatures. 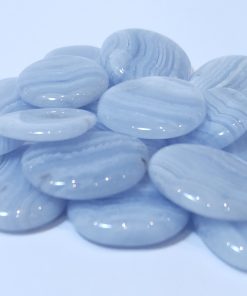